Welcome to Majestic Oaks Auction's new home for News and updates! We're the longest player running auction on Great Lakes! Located outside Vesper. A Big thank you to the GL Roleplay Community for this forum.

Majestic Oaks Auction held its annual celebration in our little pixel escape on December 18th. The event began with our traditional thanks to all who bring their patronage and support to our volunteer events over the year/s. Then it was time for a group photo, also a tradition. 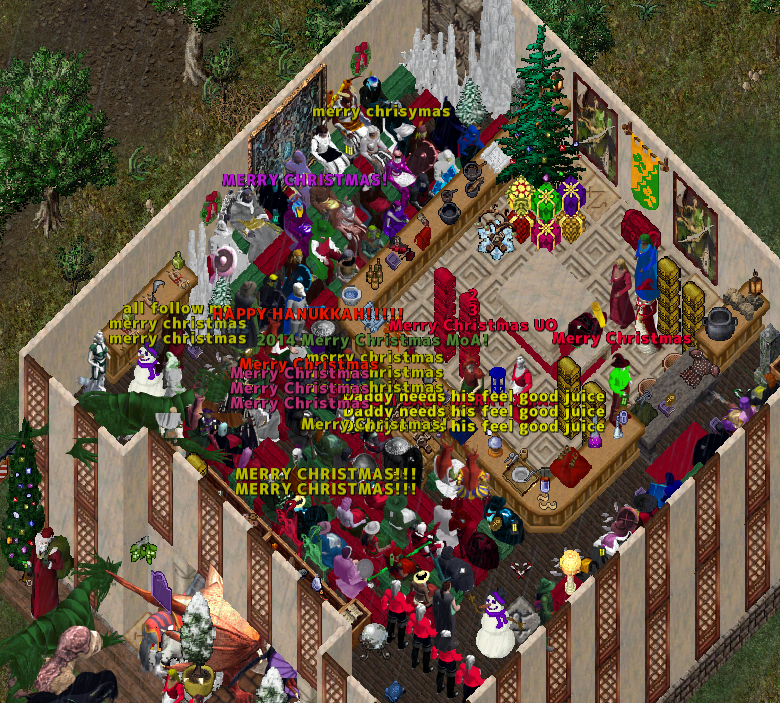 Merry Christmas UO! With the pleasantries done we turned to the purpose of this gathering, to give some things away and have fun. The evening began with a trivia question regarding the Rams/Cardinals football game the week before, the gold & question requested by Sir Thomas the prior week. Bella won this 2 million gold. The second question of the night worth 5 million gold went to Governor Dot Warner (as I recall something about Star Trek).

The auction began, a much abbreviated version as there was a lot of ground to cover on the giveaway end. The first item of the night was won by Bucketman, second item was a no sale (it happens). Next came two more 5 million gold Trivia questions first won by Bella and the second by Jabberwocky.

“The 12 Days of Christmas” give away was intermingled in the auction. Beginning with day 12, which was won by Angry Jamaican of GOF with the lucky ticket of DJ58 (12 Soulstone Fragments).

Next items up for sale were a 1997 (Mostly) mix of newbied Christmas items won by Tyrtle of FTT and a Necropig won by Shadius of H^I. Followed by two more 5 million gold trivia winners Governor Willa of Yew-wood and Princess Amara.

The final two items auctioned were a Garden Shed and a Tiger Ethereal mount both items went to winning bids posted by Hearts Desire of Hearts Incorporated (H^I). Then we began the serious work of giving away stuff!

Day 10 went to Beck with the winning number of DJ22 he received ten 120 power scrolls; Anatomy, Fencing, Meditation, wrestling, swordsmanship, animal lore, animal taming, bushido, mysticism, and evaluating intelligence.
Day 9 was won by Iggy The Great with lucky number mel60, a box with 9 talisman, a vorpal bunny summoning, 3 talisman of luck, other “turn in” talisman to complete the set.

The last two trivia questions were done for 5 million gold each with Shadius of H^I and Willa of Yew-Wood winning those.

Day 6 was won by Alms with the number DJ29, prize being ethereal mounts, a cu sidhe , charger of the fallen, horse, llama, Ki-rin, and an Ostard (I believe, I have them right).
Day 5 was won by Governor Dot Warner with Mel38, Governor Warner received an Allegiance Pack (containing a Chaos and Order banner), 9th year Banner deed, mining cart, and skull and dolphin rugs.
Day 4 was won by Lee Lee of Naughty by Nature (NBN) with DJ30. The prize Lighthouse deed, 6th year brazier, sheep statue and davies' locker.
Day 3 was won by Guinevere with Mel43, receiving 3 sets of veteran reward teleporters.
Day 2 was won by Off of Crew with DJ42, receiving two angel boxes with full soulstone tokens inside.
Day 1 was won by DoCtOr DeTrOiT of UOD$ with Mel36, prize a neon gift box containing the deep red Flowers of Moira (an EM item) 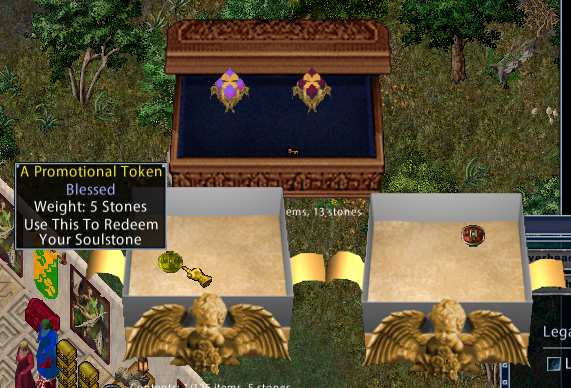 Day 2 The next event of the evening was the Mystery Chest, 46 items about 126 stones, this box is put together by purchases and donation and sold to begin the next years auction budget with. In my notice about this event I did specify no discounts, despite that the bidding began at 500m gold and accelerated rapidly to 750m. Winning bid went to Xevei of BANK for 750m gold. [Despite my attempt to do away with the traditional discount and mixed feedback from the audience who read my article (yay you!!) DJ did discount the box to 500m creating some mixed emotions in the crowd.] Xevei has been a longtime friend of Majestic Oaks Auction and being a loyal supporter did pay his original 750m winning bid price. I apologize to any who felt this transaction was unfair. (The Mystery Chest contained: Garden shed, Ethereal Tiger, Ethereal Boura, Ethereal Polar Bear, Ethereal Cu Sidhe, 10 Soulstone fragments, Veteran reward teleporter set, Evil furniture token, UO 7th Anniversary token, shadow token, crystal token, UO 8th anniversary token, Spring Décor token, Race change token, Stygian Abyss Statuette token, Broadsword plaque, pig on spit, coffee plant, 100 Boura pelts COM deed 13th anniv. Ticket, +25 stat scroll, Vollem, Turn in dye, Mesanna’s bell, Humility VvV banner, Neon gift box complete.) 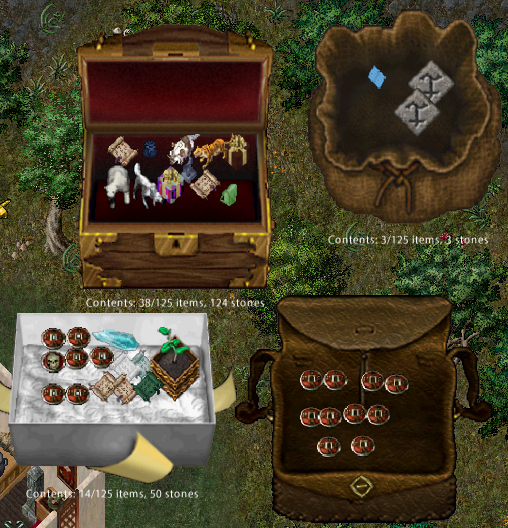 Mystery Chest The last item of the night was a new one for us, a Mystery House!!! You read right, a house outside Luna with an assortment of things inside, the house and contents going to the winning bidder. The one thing that stood out as I toured it was a Blessed Ornament of the Magician secured to a display case. Many of the containers even I could not preview. The house went to VengaBoy for a cool 125m. The proceeds also going to help Majestic Oaks Auction in 2015! The House donated by Destinie Moon of SiV.

With all the business attended to the finale of the night was to visit Santa at the Majestic Oaks Auction House castle on ice Island. Former home of Impy’s Artic Faire. The line circled the castle walk ways, but one by one most stuck around to see Santa and receive their gift. 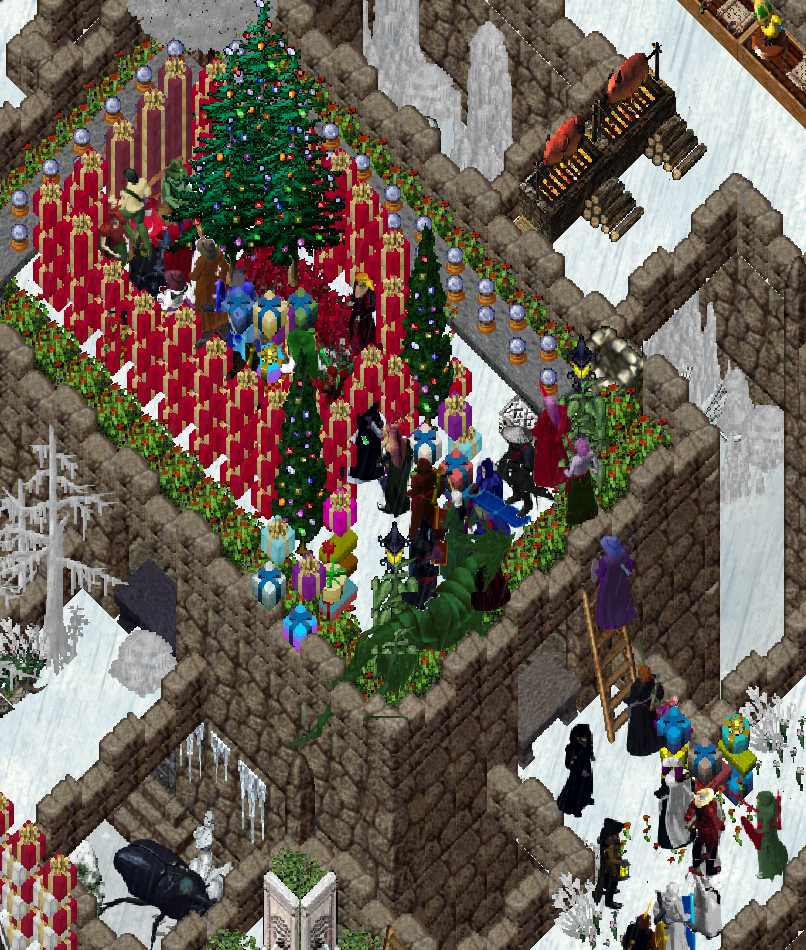 Visiting Santa Wishing each and every one of you a Magical Holiday Season!!! I’d like to thank all of those who make this possible!!! With a special thanks to Anthony for sorting, hauling, shopping, proofreading etc.